In this year of celebrations in the UK to mark the Platinum Jubilee of Queen Elizabeth II, Stuart Eagles looks back at a notable Royal commemoration of Ruskin. In this case, the Royals involved were the King and Queen of Italy, and the occasion was the International Art Congress in Venice in 1905.

A ROYAL COMMEMORATION OF RUSKIN

Ruskin called Venice his “Paradise of cities”. It was his life-long love interest. He shared with the world his joy in the cultural treasures of this floating metropolis. He saw in Venice the free, imaginative and creative spirit of Gothic.

When Ruskin looked at Venice he recognised England. He urged the English to learn its lessons and avoid its fate. In the Venice of the Middle Ages which he venerated, he saw England not as it was, but as it might be, and as it ought to be. 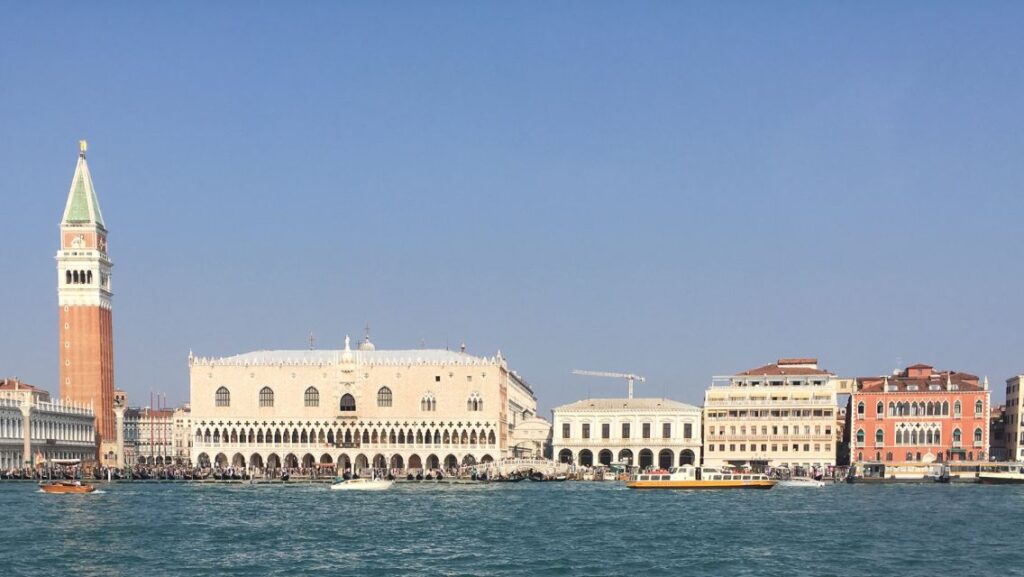 The approach to Venice: the Campanile (far left) next to the Ducal Palace, and (far right) the Hotel Danieli, where Ruskin often used to stay when he was in Venice.
Photo: Stuart Eagles (2017).

It is fitting that of all the international gatherings to commemorate Ruskin, the most spectacular that has ever taken place was connected with the Art Congress at Venice. This was in September 1905, over fifty years after Ruskin published his influential three-volume study, The Stones of Venice (1851-53). An audiobook of this seminal text, introduced, selected and read by Ruskin scholar Robert Hewison, is available free online by clicking here.

The prospectus of the Art Congress described Ruskin’s crucial significance to Venice as  “the learned and imaginative illustrator of its stones, who has contributed so efficaciously to the reflorescence and profusion of aesthetic feeling”.

Delegates attended from all over Europe, and around the world. They came from Italy, of course, and the UK, but also France, Belgium, the Netherlands, Germany, Switzerland, Hungary, Russia, and the United States. Among them were Eugene de Radisies (Director of the Hungarian Museum of Decorative Arts), the Belgian politician, Charles Buls (for many years the Mayor of Brussels), and the colourful American art historian, Bernard Berenson.

The UK was represented by Royal Academician Sir William Blake Richmond, a friend of Ruskin’s and his successor as Slade Professor of Fine Art at Oxford, also Edmund Gosse, William Michael Rossetti, Sir Aston Webb, and Lord Windsor. Ruskin was represented by George Thomson, junior trustee of the Guild of St George, a co-operative cloth manufacturer and local politician in Huddersfield; Gill Parker, the curator of the Ruskin Museum in Sheffield; and Ruskin’s friend and publisher, George Allen.

Allen took with him for exhibition the manuscript of The Stones of Venice. Revered by the Congress as a “a living reflection of Ruskin among them” Allen was elected a vice-president of the Congress, with special responsibility for its “Art for the Public” initiative. According to Gill Parker, George Allen judged the Ruskin Commemoration “absolutely unique. Such honour had never before been paid, nor such tributes to the memory of the master either in this country or any other.” For Parker himself, the event was “a splendid tribute to the genius of Ruskin”.

The Ruskin Commemoration, held on 21 September 1905, opened the International Art Congress which was presided over by Count Grimani, the Syndic (or Mayor) of Venice.  Richmond, imputed “political importance” to an occasion which brought so many European representatives together in Italy, “the home of European art”, and specifically to Venice, “the place on earth that had inspired so many painters and sculptors”.

The main event was an impressively eloquent lecture by the French art historian Robert de la Sizeranne, the author of Ruskin and the Religion of Beauty (1899), the eloquent study of Ruskin’s life, work and legacy that, more than any other book, influenced Ruskin’s reception in Europe in the early twentieth century. As he was introduced by Prof. Fradeletto, a celebrated orator and art lecturer, the chimes of the hammers could be heard as workmen rebuilt the Campanile which had collapsed in 1902 (the work was completed in 1912)..

M. de la Sizeraane’s subject was “Ruskin at Venice”. As he acknowledged when he rose to speak, he was a Frenchman, speaking in French, about an Englishman, to an international audience gathered in Italy. Ruskin’s importance was palpable. This was the only event of the Congress attended by Victor Emmanuel III and Queen Elena (of Montenegro), the King and Queen of Italy, who sat in the thrones in the magnificent venue in which the gathering took place: the beautiful Senate Chamber (Sala dei Pregadi) of the Ducal Palace (Palazzo Ducale), with its gorgeous ceiling painted by Tintoretto, whom Ruskin venerated.

M. de la Sizeranne said that Ruskin was a ‘Diviner’ of truth who, above all else, was a munificent man. Ruskin believed that everyone was entitled to enjoy their work, that art was for all, and it was, in Keats’s phrase, “a joy forever”. The lecturer asked if Ruskin’s was an ideal “reconcilable with the economic evolution of modern life, in which everything seems to make for speculations, a speculation ever more and more narrow and exclusive.” He did not attempt to answer the question, but added that “we have here, in Ruskin’s work, the grandest aim, the most noble attempt ever made by an aesthetic teacher to reconcile the worship of beauty with the duties of our common human life!” Striving for such harmonisation became the focus of the Congress.

Gill Parker later reported that the lecturer was “repeatedly cheered after his more striking passages in praise of the master” and on concluding his lecture he was presented to the King and Queen. The day ended with a sumptuous banquet hosted at the Lido by Venice’s municipal authorities. 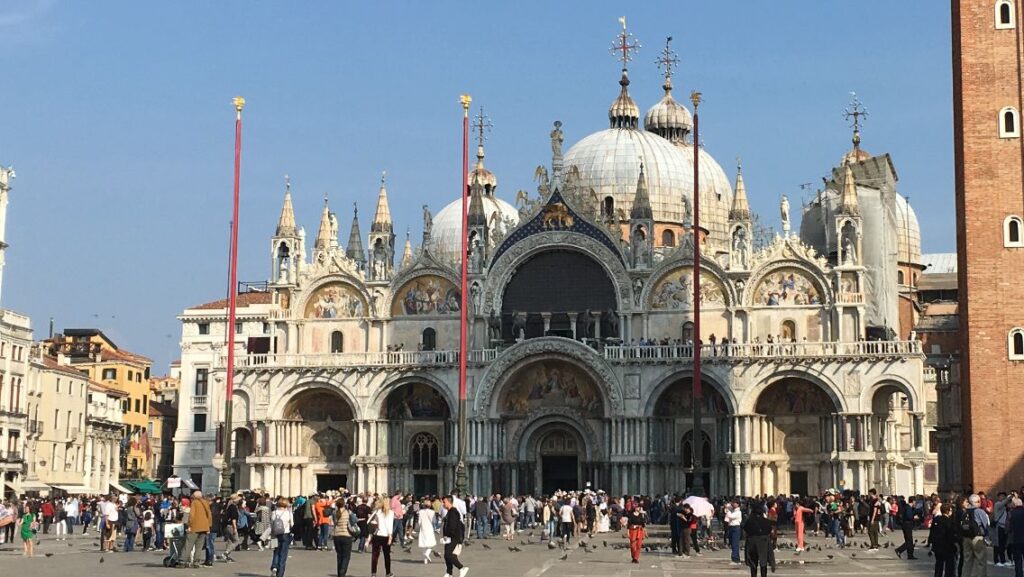 An Italian proposal arose at the Congress to erect a memorial bust to Ruskin. Carew Martin, then acting secretary of the Royal Society of British Artists, co-ordinated the campaign in England, but the main mover was Count Alvise Zorzi, the disciple and friend with whom Ruskin had collaborated in his campaign to save St Mark’s Cathedral from unsympathetic restoration. Zorzi’s plan was to appeal to the Italian Minister of Public Instruction , who had been present at the Congress, to urge on him the justice of a monument to the man Zorzi described as “more Venetian than the Venetians”. The following summer Zorzi would contribute his reminiscences of Ruskin to the Cornhill Magazine in a pair of articles on “Ruskin in Venice”.

The Congress ran for eight days more. Events were hosted by Prince and Princes Alberto Giovanelli in the Palazzo Fosca; by Lady Layard,  in her palace of treasures overlooking the Grand Canal; and there were excursions to  Murano, Burano, and Torcello. Proceedings were brought to a close with a banquet at which Count Grimani made generous concluding remarks.

The lecture was translated into English by the anti-suffrage essayist, Ethel Bertha Harrison, the wife of the positivist Frederic Harrison, and was published early in 1906 by George Allen. 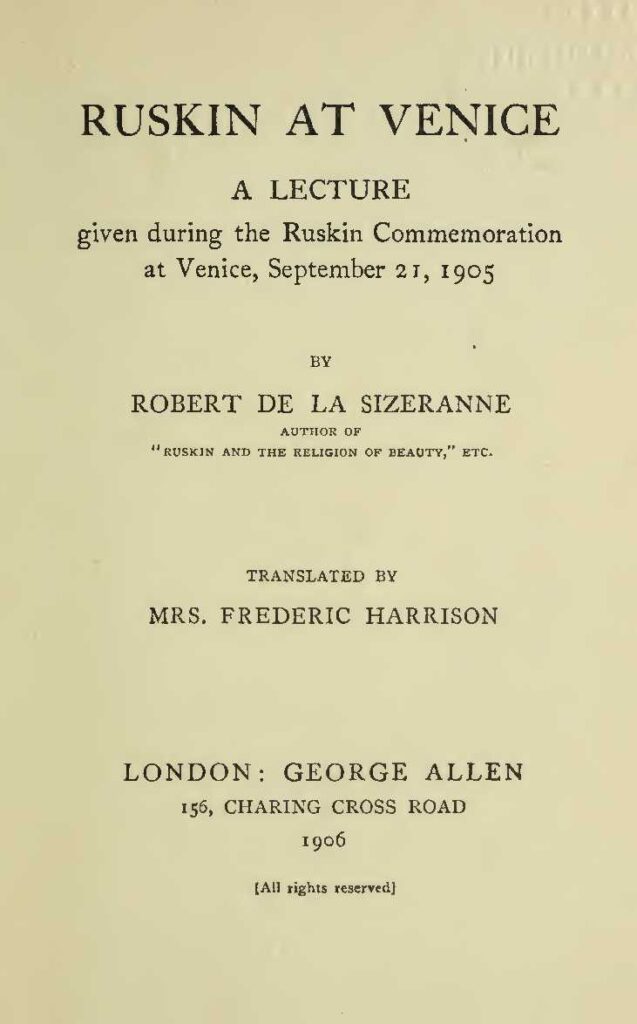