3. Remembering the family of George Baker of Birmingham & Bewdley
1 Nov, 2020

On All Hallows’ Day we remember the family of George Baker (1825-1910), the blacking manufacturer, Quaker, philanthropist, Mayor of Birmingham and Bewdley, friend of John Ruskin, and second Master of the Guild of St George.

(This blog entry is intended as a post-script to an article I wrote and published in The Companion in 2016.)

“[T]he growing good of the world is partly dependent on unhistoric acts; and that things are not so ill with you and me as they might have been, is half owing to the number who lived faithfully a hidden life, and rest in unvisited tombs.” – George Eliot, Middlemarch (1871)

The Story of a Family Memorial

In the summer of 2018 I located the final resting place of George Baker. His grave sits in the huge Birmingham City Cemetery at Witton. Baker died on 15 January 1910, aged 84, at 19 Charlotte Road, Edgbaston, a property which has since been demolished. He was buried three days later in a spot certainly known to him.

The grave in which he was interred was securedn by him and his family as the burial plot for two young ladies whose lives were cut tragically short by a drowning accident in 1884. The women were cousins: Lilian Rebecca Baker (Lily), who was 20 when she died, was one of George and his wife Rebecca’s daughters; Margaret Ellen Baker (Maggie), who was 22, was one of John Edward and Anna Jane Baker’s daughters. The gravestone records, in Quaker fashion, that the unmarried cousins “were drowned whilst bathing together at Llanaber North Wales, on 21st of 7th month 1884″. 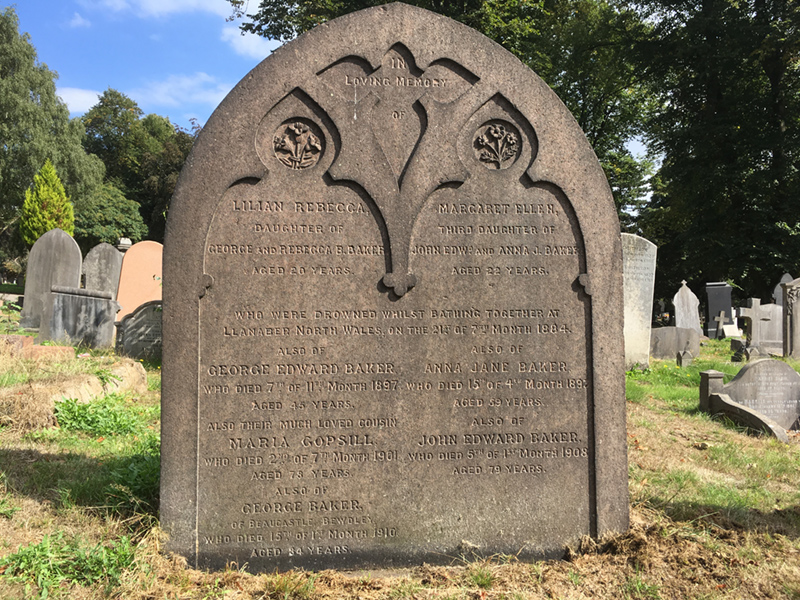 For Ruskin scholars and Guild historians mention of this tiny and tranquil Welsh coastal resort recalls the fact that Ruskin’s friend, the Guild Companion and donor, Fanny Talbot, is buried in the churchyard of St Mary’s and St Bodfan’s, Llanaber, a site that overlooks the sea, two miles north of Barmouth. The connection may be a coincidental one, but the story of the Baker cousins’ tragic deaths adds poignancy to the Guild’s association with the area, aspects of which were explored by me in The Companion in 2013 (pp. 24-25), and by Stephen Wildman in The Companion in 2017 (p. 32). By the time of the Bakers’ visit, Mrs Talbot had already donated to the Guild thirteen fishermen’s cottages on The Rock in Barmouth.

The probability that the cousins were close to each other is not surprising. George and his brother John Edward were only three years apart in age, their schooling at the Quaker Ackworth School partly coincided, both contributed substantially to the civic life of Birmingham, and John Edward joined George to run the large blacking factory in the city established by their father.

News of the tragic accident that befell Lily and Maggie was quickly syndicated across the regional newspapers, but the source of the fullest information is the Cambrian News (25 July 1884).  The drowning occurred around midday on Monday, 21 July “on the shore under Llanaber Church […] where the beach is almost as smooth as a lawn, and the slope seawards nearly imperceptible”.  The report continued:

“In comparatively shallow water, within a short distance of the land, and in sight of their relatives, two young lady visitors from Birmingham were drowned while bathing, and their bodies washed ashore.”

The cousins had been staying for nearly a week, together with John Edward and Anna, and other (unidentified) members of the family, at Hendre coed, described by the newspaper as “a comfortable villa on the hill side near the old parish church of Llanaber, and overlooking the sea, which is about a quarter of a mile off”. The property, though altered, survives today. The Bakers’ principal host was Laura Williams, a 35-year-old spinster who had quite recently turned the nine-acre smallholding and family home formerly run by her parents, Edward and Ellen, into a guesthouse. 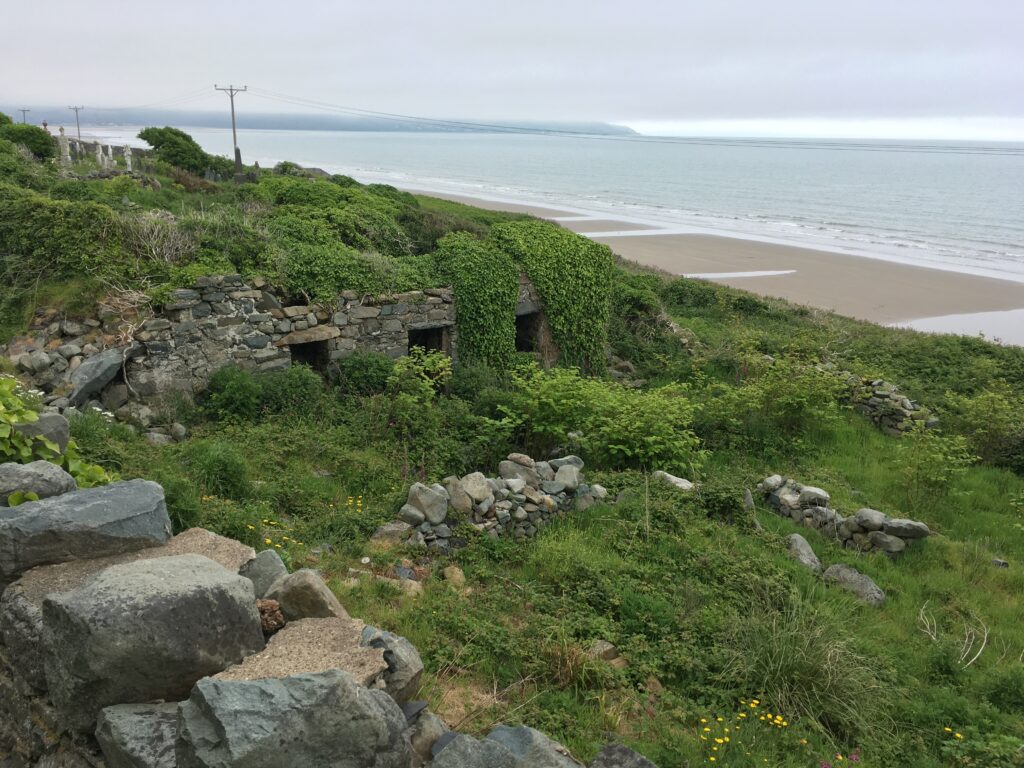 Looking southwest from the churchyard at Llanaber, Wales, where the young cousins sadly drowned in 1884. © Stuart Eagles.

Exactly what happened on that fateful day remains a mystery. John Edward Baker and some of his daughters left the guesthouse at 10am to bathe, and the cousins followed about half an hour later. Conditions were good, the tide was at low water, and there was no indication that the women had ventured beyond their depth.

Neither Lily nor Maggie apparently made a cry of alarm. But spotting some sort of struggle, John Edwardr, then in his mid-fifties, rushed twice into the water in an attempt to rescue them—first venturing up to his waist, then up to his neck. This was all the more brave because, in common with the rest of the party, he was unable to swim. This deficiency necessitated a call to Barmouth for help, and the newspaper describes people rushing north by foot, bicycle and boat in order to reach them.

Quite a large crowd gathered at the beach, but it was too late. The bodies of the young women were washed ashore. Although one Richard Powell tried to resuscitate one of them, and Griffith Griffiths the other, nothing could be done and the lifeless bodies were removed to Hendre coed.

The inquest, which was held on the morning after the accident, was described by the newspaper as “most unsatisfactory”. The county coroner, Griffith Jones Williams, called only the landlady of Hendre coed to give evidence, even though she had not seen the accident and was a quarter of a mile away at the time it occurred—and notwithstanding the fact that several witnesses were present at the inquest and ready to testify.

The jury’s Welsh pedigree cannot be doubted: there was a Davies, an Evans, a Lewis, a Kynoch, a Jones, an Owen, a Griffiths, a Williams and several men named Edwards among the men. Ultimately, for all that the inquest was cursory and superficial, the jury agreed with the coroner’s view that as there could be no doubt that the women died by drowning, and that there was no suspicion of foul play, it was needless to prolong proceedings and the sense of torture that must have been felt by John Edward Baker, the grieving father and uncle who was present in the court-room. The foreman of the jury, Edward Davies, accepting the coroner’s direction, concluded by expressing the sympathy of his fellow jurymen, and the newspaper reported that, “Mr Baker, who spoke with emotion, thanked everyone for [the] kind sympathy and help rendered to him on the occasion, and left the room visibly affected”.

John Edward Baker and his wife, Anna, who died in 1908 and 1897 respectively, were buried with their daughter and niece. It is worth mentioning that Anna was the daughter of Edward Foster Brady (1802-1838), headmaster of Croydon School. Ruskin, of course, had a particular affection for the area, especially for the springs of the River Wandel. Ruskin’s mother was born and grew up at The King’s Head, Croydon, run by her parents, and as a boy Ruskin visits his maternal aunt in the town.

The gravestone at Witton also commemorates George Edward Baker, George Baker’s eldest son, who died in 1897 aged 45.  Also, Maria Gopsill (1823-1901), who is described on the gravestone as George and John Edward’s “much beloved cousin”. She was the daughter of their maternal aunt, Ann Downing, and her husband, James Gopsill. James died young, and all his children, including Maria, appear to have been given work in the Bakers’ blacking factory, probably saving them from destitution. Maria eventually became a factory forewoman at a time when women rarely rose up the ranks. She lived with George and his family both at Bellefield in Birmingham, and later at Beaucastle in Bewdley. It is clear that the cousins were particularly close to each other, with George and John Edward acting as executors of her estate.

By the time George was buried in the family plot on 18 January 1910, he had attended the funerals of the six relatives already laid to rest there, and was the last of the family to be committed to that earthly spot. At the bottom of the first column of the gravestone, a modest inscription records simply that the monument marked the final resting place

In the adjacent grave, marked by a separate, smaller, paler stone (see photo), were buried George and John Edward’s sister, Eliza(beth) Maria Baker (1833-1922), the widow of Joseph Sturge Southall. Buried with her was her only child, Joseph Edward Southall RWS (1861-1944)—the artist who drew up a plan for a Guild museum at Bewdley that was never carried to fruition. Also buried there was Joseph Edward Southall’s wife, Anna Elizabeth Southall née 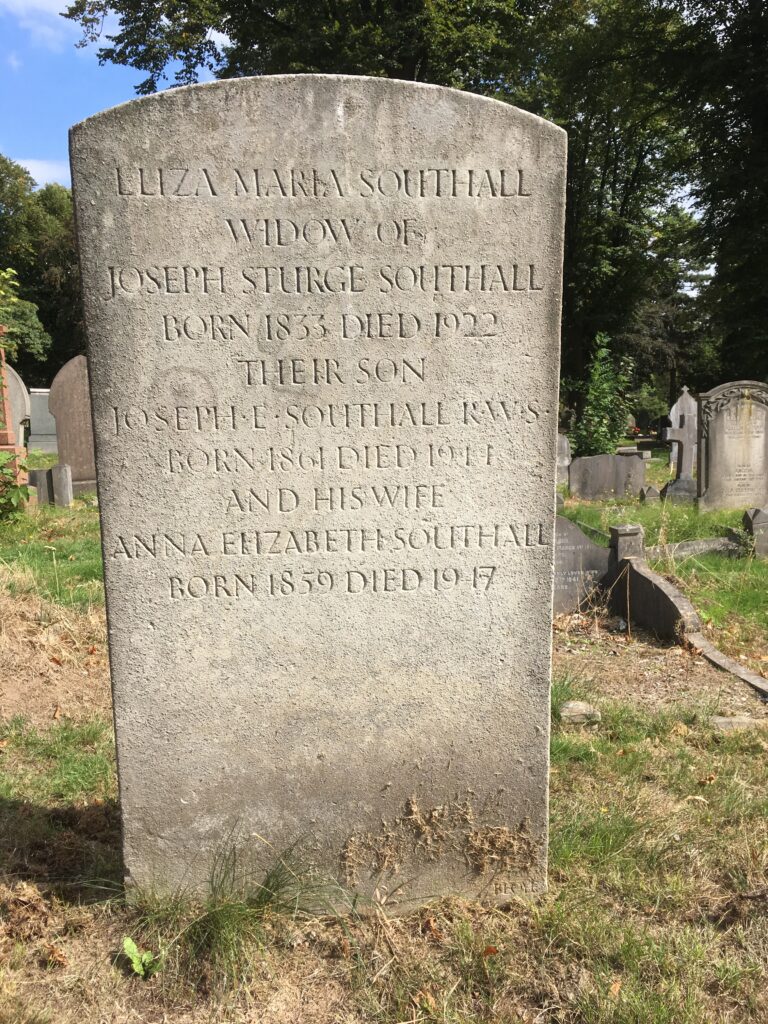 These two Baker family memorials, on the small piece of English ground dedicated to members of the Society of Friends at Witton, record the lives of people who made an important contribution to the history of Birmingham. Some of them also helped to shape the Guild of St George and Ruskin’s legacy. Let us remember them.

Please send any comments to contact@stuarteagles.co.uk