Descriptions abound of Ruskin as a lecturer at Oxford. As a student Michael Sadler (1861—1943) greatly admired Ruskin, and he became his life-long disciple. Sadler, who was a historian, dedicated his career to education, and served for many years as a university administrator. Between 1923 and 1934 he was Master of University College, Oxford. In October 1913 he addressed the tenth annual meeting of the Workers’ Educational Association. The conference was held at the University of Leeds, of which he was then Vice-Chancellor.

Recalling a course of lectures he heard Ruskin give at the Oxford University Museum of Natural History, Sadler gives us the following striking reminiscences. I reproduce them because until recently they were unfamiliar to me. They agree in many particulars with the well-known accounts of Ruskin frequently quoted by scholars. But this is perhaps one of the pithiest and most complete accounts of what it was like to hear Ruskin lecture at Oxford in the late 1870s, and Sadler vividly evokes a sense of the period.

I remember Ruskin entering the lecture-room, escorted by his old friend, Sir Henry Acland. He wore light-grey trousers, a waistcoat of the same grey cloth, with a very large opening, a black frock-coat, and a tie of intense blue. The influence of the aesthetes was at its height. Oscar Wilde had left the University two or three years before. We were all for faded greens and yellows, and Burne-Jones photographs. A friend of mine used to have his lunch on the bare floor, the only decoration a vase with one jonquil in it. We wore our hair very long, and some of the cult affected to take their only exercise on the top of the trams, then a novelty in Oxford.

I remember what a shock that staring starch-blue tie gave us, worn by the master whom we venerated. On the top of all this, he had a voluminous silk gown, with a Fellow-Commoner’s velvet cap. As he lectured, he gathered up this immense gown in a bunch under his left arm, and the grey waistcoat and tie swelled out above like the breast of a pouter pigeon. As he read, he cocked his head on one side like a bird, and his bright eye glinted out sidewise like a thrush’s. I thought of him then, and think of him now, as a large, grey-black, benevolent, mischievous bird, with bright blue feathers under his throat. His voice was entrancing. You could have listened to it for hours. The pronunciation was exquisite, and modulations of his tone like music.

And when he came in the manuscript to some passage extravagantly over-phrased in censure of modern life, his bird-like eye would shine, the head would be cocked a little more on one side, and he implied to all of us who listened to him that we must take these violent expressions as half humorously meant. To this day, as I read any page of Ruskin, I seem to see sentences here and there in italics, and, in the margin, a warning note that one must not take them too seriously. And these are the very passages that the critics who never heard Ruskin would quote as proofs of his over-vehemence in denunciation. 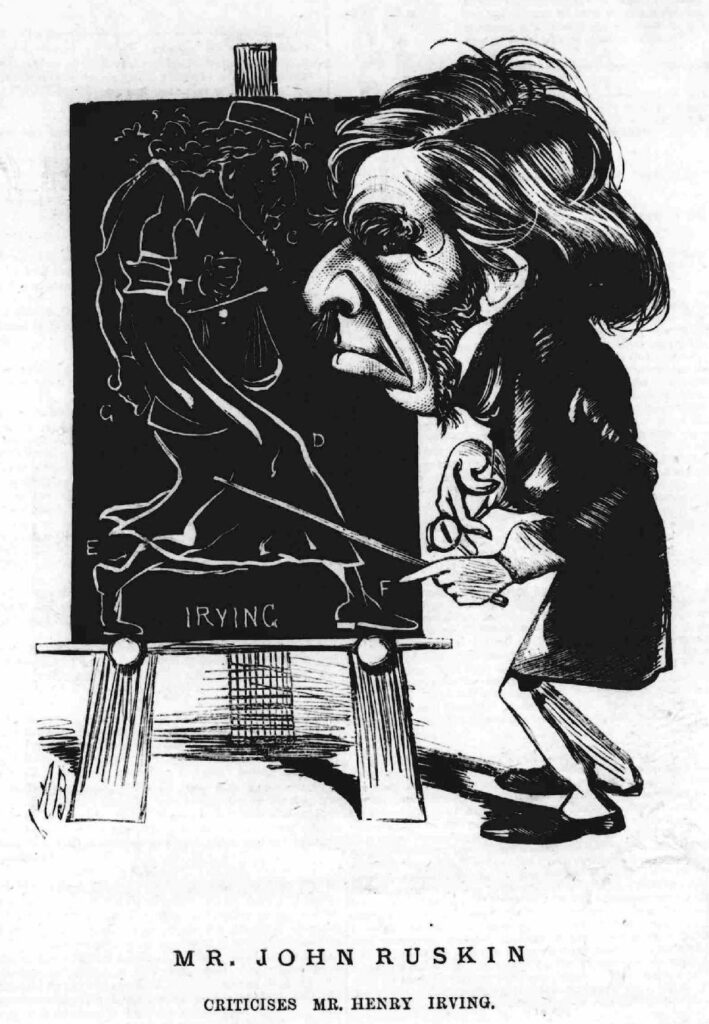