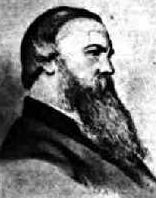 John Henry Chamberlain (1831-1883) (pictured above) was one of Birmingham’s most eminent architects. A leading Liberal, a talented lecturer, and a dedicated public servant, Chamberlain counted John Ruskin as one of the greatest influences on his life, work, and outlook. Changed forever by reading The Seven Lamps of Architecture (1849) (pictured below) he became one of the most important Companions of Ruskin’s Guild of St George, the utopian society founded in 1871 to combat the dragon of industrial capitalism. 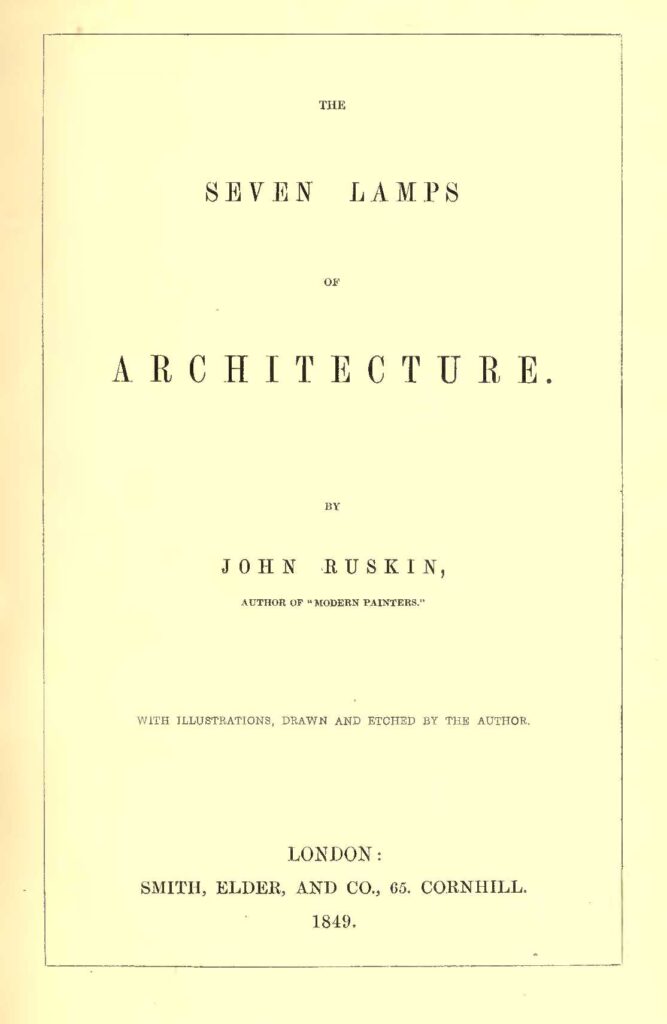 The son of a Baptist minister, Chambrlain was born, raised and trained as an architect in Leicester. He moved to Birmingham in 1856, and quickly joined George Dawson’s Church of the Saviour, impressed by its civic gospel of hard work, public service and personal spirituality. He initially practiced alone as an architect. A short-lived partnership followed with William Harris (1826-1911) who later married Chamberlain’s widow. As we saw in the previous blog. Harris as well as Chamberlain attended that first general meeting of the Guild in Birmingham.

Chamberlain later formed an influential and enduring partnership with William Martin (1829-1900). Continuing Martin’s tradition of public works, the partnership was soon commissioned to design Birmingham’s Free Library.  Hospitals, schools, other libraries, public amenities, and many grand houses belonging to Birmingham’s Liberal elite followed, among them the Birmingham Institute of Art and Design in Paradise Street, the Birmingham School of Art, and Highbury Hall, the home of Joseph Chamberlain (no relation).

In 1859 J. H. Chamberlain was appointed Professor of Architecture at Birmingham’s Queen’s College. He gave numerous lectures to other educational, artistic, literary, philanthropic, and professional organisations. Among the many different local societies to which he belonged was the Midland Counties Archaeological Association, which he served for many years as honorary secretary.

Chamberlain became a member of the council of what is now the Birmingham and Midland Institute in 1865. He served as honorary secretary for the rest of his life. As the Institute acknowledged at the time of his death, in the 18 years of his involvement Chamberlain revived, reorganized and developed the institute, helping to win it a deserved reputation for excellence far beyond Birmingham. (In 1869 no less a figure than Charles Dickens served as the Institute’s President.)

Chamberlain keenly admired Ruskin’s Fors Clavigera (1871-84), his letters to the workmen and labourers of Great Britain. Enthusiastic about the objects of Ruskin’s Guild of St George, Chamberlain became a Companion and pledged himself to trust in God, to believe in the nobleness of human nature, to labour for his daily bread, and to abhor cruelty. As we saw in the last blog, Chamberlain spoke at length and with passion at the Guild’s first general meeting in February 1879. He rebuked his fellow Companions for something approaching “an excess of modesty and bashfulness” and keenly expressed the deep “debt of gratitude” he was sure they all owed Ruskin. Since discovering Ruskin’s writings thirty years earlier, scarcely a day had passed, he testified, when he did not feel “straightened and bettered” by reading him.  He seconded a motion to make Ruskin Master of the Guild for life. He had become a Companion to help him, because “there was a soul”—Ruskin’s—”going about asking for a body”—and the Guild, he believed, would serve the purpose very well. In a conscious nod to Birmingham’s “Civic Gospel”, Chamberlain declared that “occupation ought to be no bar to a man’s enjoyment of all the advantages that education and enlightenment could give him”. Working men and artisans, he said, were as deserving of “the noblest life” as the rich. If Companions could only sustain “belief in their principles” they would be carried through all failures to success.

By the end of the year Chamberlain had become the Guild’s co-trustee, with his friend and fellow Liberal, George Baker (1825-1910), a Quaker blacking manufacturer who at different times served as Mayor of both Birmingham and Bewdley.  Had Chamberlain not died suddenly on the evening of Monday, 22 October, 1883, shortly after delivering a lecture on “Exotic Art” at the Birmingham and Midland Institute, he would probably have served the Guild in still greater capacities.

Shortly before he was officially confirmed as a Guild trustee in November 1879, Chamberlain delivered the first of three lectures on Ruskin’s Seven Lamps. He called it “After 30 Years”. He had told his fellow Companion at the Guild’s first general meeting in February that this was the book that had come to him as “light in the midst of profound darkness, as water in a land more than ordinarily desert and drear”. Chamberlain shared Ruskin’s belief in the paramountcy of craftsmanship and natural forms. His Ruskinian Gothic buildings were also influenced by the wider Arts & Crafts Movement.

Addressing a large audience at the Birmingham Fine Art Society on the evening of Wednesday, 8 October, 1879, Chamberlain remarked that “there were a good many books written and published about which it would be very idle to inquire thirty months afterwards, or even thirty days”. The account of the lecture that follows shines a light on Chamberlain’s admiration for Ruskin and demonstrates how one book so profoundly influenced the career of an architect who helped to transform the urban landscape of one of England’s leading industrial cities. The account is taken from The Building News (10 October 1879) p. 426.

There were not many books that really retained their hold upon the public for so long a time as thirty years, and when any special book did not only retain that hold, but increasingly so, and was read by ever-increasing numbers, it was worthwhile, perhaps, to inquire the secret of that popularity, and to try and see how far it had the elements of permanent endurance.

For his own part, he might as well say at the beginning that which he might be expected to say, that he thought no more valuable book had ever been written on the art of architecture; and although there were some things they might be disposed to differ from, there were other things they might at least criticise in a friendly way. Yet, on the whole, he felt most strongly that Dr Ruskin’s book was essentially a true book and a great book; that it had had a most important vivifying influence with regard to architecture, and that influence was fated continuously to increase.

If they were to understand the book he must very briefly sketch the kind of art which existed when it was written. The book, as they knew, was about architecture.

Now, the question which would arise in every candid mind was, what was architecture? He should like to say he did not know—(a laugh)—and he thought the greater number of persons would also say they did not know. There was a large and excellent portion of the community that thought it something inseparably connected with 5 per cent. (laughter), but that was a side of the question to which he did not propose to address himself at all.

Mr Ruskin defined architecture as the art which contributed to a man’s mental life, power, and pleasure, and as forming certain characteristics to a building venerable or beautiful, but other­wise unnecessary. According to Mr Ruskin’s definition, then, the thing he called architecture was wholly unnecessary—that was to say, from the ordinary outline of a building.

He ventured to contest that proposition and amend it, and say that architecture did not consist, at least in the beginning, in adding unnecessary features to a building, but in taking advantage of the features [that] must have given them such shape or such form as was generally acknowledged to be beautiful, and which was perhaps—as he knew to his own cost—still considered by utilitarians to be unnecessary.

Thirty years ago was the culminating period of the most disgraceful history in architecture that England or the world had had. It was the time when plastering had grown to a fine art; when the plasterer, the stucco-maker, and stucco-seller, were most important persons, and when the covering of a building with stucco, to imitate stone, was considered architectural decoration. The ordinary architecture of that day was in two styles, and two only—one plain, the other—he should like to use a better word, but he could not find a better, and it was a hateful one—ornate. In that day, and he remembered it well, the churches, with hardly an exception, were built in that style known as the Classic style; and the architecture of the Nonconformist places of worship was also Classic, but a duller Classic than the churches.

The public buildings were Classic, and if they wanted anything in the way of adorn­ment they stuck up a portico as a colonnade. If they wanted illustrations of this class of architecture let them look at the British Museum, the General Post-Office, and their own [Birmingham] Town Hall.

The art literature of that day he described as dead as it could be; it was as dull as dust, and as dismal. A worthy gentleman named [Isaac] Ware [(1704-1766), translator of Palladio, and Secretary of the Office of Works], about 200 years ago, published a book which exactly illustrated the kind of literature he alluded to. The book was called “The Com­plete Body of Architecture” [(1756)—actually much less than 200 years earlier]—no spirit; they knew nothing of the spirit of architecture, abso­lutely nothing at all; it was all body, and rather than being a book on architecture, was simply a book of various receipts, by which they might learn to beautify a building.

Mr Chamberlain explained that the styles of architecture then in vogue were Doric, Tuscan, Ionic, Corinthian, and Composite, and spoke of the effect Mr Ruskin’s writings had upon architects when he wrote in favour of the Gothic style in preference to the others.

[Ruskin’s]s “seven lamps of architecture” were

and to sum up the book in one clumsy sentence, art, if it was art, must be their best; they must give to it not only their leisure and pastime, but their heart, and soul, and strength; it must have

← Prev: 14. The First General Meetiing of the Guild Next: 16. The Ruskinian Shopkeeper →