Among the numerous treasures Ruskin acquired for himself and the public in the course of his long life, from books to botanical specimens, shells to stones, and manuscripts to minerals, his horde of coins is one of the least well-known and appreciated of his collections. With the help of the Yorkshire press, and a year on from the launch of his Ruskin research blog, Stuart Eagles unearths information about James Verity, numismatist and dealer, and one of the main sources of

To Paul Dawson
Chairman of the Friends of Ruskin’s Brantwood, editor of its newsletter, Ruskin scholar, bibliophile, and “always the widest helpful influence” on his friends.

In 1937 a letter appeared in the Yorkshire Post and Leeds Intelligencer from someone claiming that he had in his pocket one of Ruskin’s magnifying glasses.

Ruskin, he said, had taken it out of his own pocket and presented it as a souvenir to James Verity (1845-1910). Verity, a leading Yorkshire numismatist and dealer, was based in Dewsbury. Between 1880 and 1886 Verity had supplied Ruskin with a considerable number of rare Roman, Greek, Norman and early English coins, most of them destined for Ruskin’s collection at St George’s Museum in Sheffield, and others for Ruskin’s personal collection at Brantwood on Coniston Water.

The writer with Ruskin’s magnifying glass signed his letter, “M. I. E.”. A little detective work strongly suggests that this is Matthias Isaac Eggleston (1855-1944), a linen draper whose family had shared a home with Verity in Earls Heaton in the 1870s and 1880s. Verity had presented Ruskin’s magnifying glass to Matthias’s sister, Mary Elizabeth Eggleston (1869-1943) in 1900.

In all Ruskin’s correspondence with Henry and Emily Swan, he mentions a magnifying glass only once. This was with reference to opals which, he insisted, “are best seen in water […] with a magnifying glass.” [Ruskin to Henry Swan (14 August 1876): Ruskin’s emphasis.]

Ruskin kept a “Coin Book” describing his collections. Although his collection included some important original coins, it also contained a much greater number of casts, autotypes and electrotypes, as well as drawings and photographs, all of which facilitated the comparative study of both sides of the coins simultaneously.

Ruskin was primarily interested in coins for their educational value as examples of design, classifying them according to subject matter, artistic merit, historical significance, symbolic meaning or mythological association, rather than by material worth, denomination, weight or market-price. In Aratra Pentelici (1870) he wrote that “metal stamped with precision, as in coins, is to sculpture what engraving is to painting” mainly because they were finished by hand. [Works of John Ruskin, eds. E. T. Cook & A. O. Wedderburn (London: George Allen, 1903-12) vol. 20, p. 312 (hereafter Works.] Ruskin asserted elsewhere that “The character of coinages is quite conclusive evidence in national history, and there is no great empire in progress, but tells its story in beautiful coins”. [Works 33.442.]

Ruskin began, but did not complete, a catalogue of the “English coins” in the  collection of St George’s Museum, Sheffield. [See Works 30.268-77.]

Among the coins he purchased from Verity were 15 Greek coins, and 11 hammered gold and silver English coins including a penny from the reign of William the Conqueror, two Edward I pennies, a penny of Edward II, two pennies of Henry VII, and an Elizabeth I sixpence, and in addition an Anglo-Gallic coin from the reign of Henry VI, plus a milled sovereign of George IV.

Ruskin also gave St George’s Museum in Sheffield more than 200 electrotypes of Greek coins from the collection at the British Museum. Plus 100 mainly milled European coins, as well as medals and seals from the eighteenth and nineteenth centuries. In 1881 he gave Whitelands College in London a noble, half noble and quarter noble of Edward III. 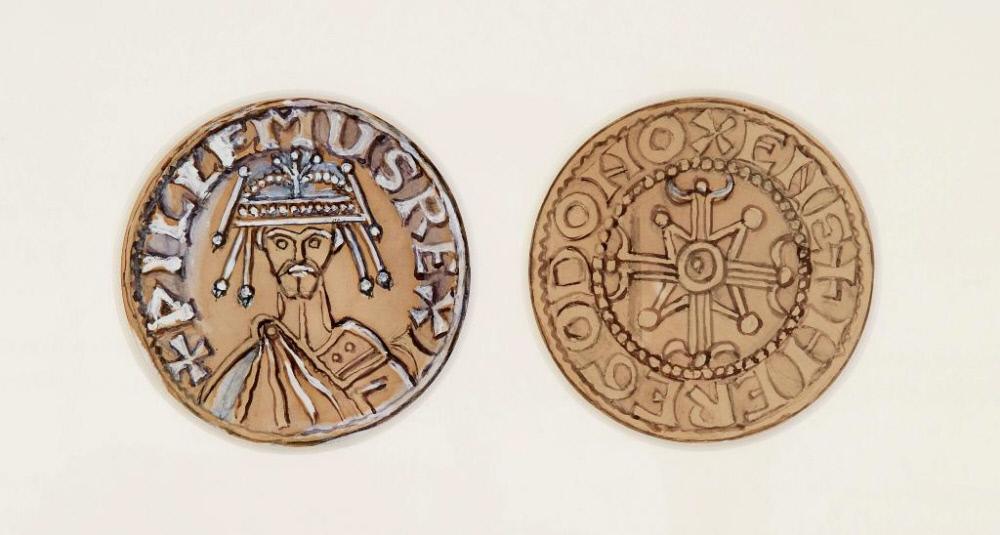 John Ruskin, “Study of a Silver Penny from the Reign of William I”: Ruskin Collection of the Guild of St George (Sheffield Museums).

Ruskin’s enlarged study of a  Bonnet type silver penny of William the Conqueror (above) was drawn in accordance with the principles he set out in his book, The Pleasures of England (1884). He advised artists to copy coins without the shadows so as to show only the basic design. By contrast, photography, which he believed “cannot exhibit the character of large and finished sculpture”; yet “its audacity of shadow is in perfect harmony with the more roughly picturesque treatment necessary in coins”. [Works 20.194.]

Of the William the Conqueror coin itself, Ruskin wrote in his unfinished catalogue:

“I must have the pride of presenting this coin to the men of Sheffield myself; but they must remember that they really owe the possession of it to Mr Verity’s research and intelligence.

Its price, paid by me, Twenty-seven Shillings and Sixpence. Its value remains to be seen in use.” [Works 30.270.]

As to use, Ruskin hoped that Sheffield’s metal workers would be inspired by the coins at the Museum not only to strike national currency but to design a new currency for the use of Guild Companions. [See Works, 30.269.] Ruskin believed that the quality of design could only benefit by the careful study of the best example from the past. The scholar Catherine Morley has also points out that Ruskin

“seriously proposed teaching weights and measures by means of coins in St Georges schools, arriving at a series of rhyming couplets to fix the evolution of the Saxon Tower pounds ‘… in school memories’.” [Catherine W. Morley, John Ruskin, Late Work, 1870-1890: The Museum and Guild of St George, An Educational Experiment (London & New York: Garland, 1984) p. 238; this refers to Works 30.279.]

The correspondence between Ruskin and his Sheffield Museum curator, Henry Swan (1825-1889), indicates that James Verity was requested to supply coins from the period of Kings Alfred, Cnut, and Edward III. [See letter from John Ruskin to Henry Swan (4 June 1880).] Ruskin also requested from the reign of Queen Elizabeth a sovereign, half-sovereign, and a crown “[w]hich will show our men why 5 shillings are called a crown”. [Letter from John Ruskin to Henry Swan (24 June 1880).] If these coins were ever acquired, they have not remained in the Ruskin Collection at Sheffield. Ruskin’s intention in assembling a collection of treasures and placing them in a museum is beautifully illustrated by this pithy explanation of the educational use of the Elizabethan coins. The purpose was to teach visitors valuable lessons by means of their cultural heritage.

Ruskin spoke of the museum as “‘a Temple of the Muses’ for intelligent study”. [Works 30.li.] In one of the letters he wrote to Verity, he commented, “I am intensely delighted with the coins as I examine further. […] I want to look at them with a less dazzled mind”. In October 1886, Ruskin praised Verity’s “teaching” and declared himself “so very glad […] to find you still a source of the delightful wealth to me”. Revealingly, in another letter, Ruskin declared:

“[…] your letting us have these coins enables me to complete what I hope will be a very precious piece of early elementary teaching for the good people of Sheffield, and has roused me to the recovery of much past thought and work which I never expected to bring out to any good, but which will all work in and up, now.”

Extracts from Ruskin’s letters to James Verity appeared in an article entitled, “‘Ruskin’s Letters to a Yorkshire Coin Collector” published in the Yorkshire Post and Leeds Intelligencer (11 December 1915). This rich source of information appears never to have been tapped by Ruskin scholars before.  An auction catalogue (dated 9 December 2009) gives the date range of the thirteen letters (comprising a total of 27 pages) as 5 June 1880 to 29 October 1886. In one of the letters Ruskin comments that he has kept “the Rose Noble of Edward IV” and “the Black Prince Leopard” for his personal collection.

In an article that appeared in the Sheffield and Rotherham Independent on 5 June 1880, it was commented that “The fame of St George’s Museum is rapidly extending” and readers were informed that Ruskin had made “an important addition to his already very complete collection of early Greek and English coins”. Without naming Verity, the report went on to say that Ruskin

“is acquainted with a gentleman who has been nearly all his life a gatherer of coins, and he had obtained a collection of extraordinary value. With great liberality he allowed Mr Ruskin to take from his collection whatever he thought might be most useful for his museum—merely asking for them what they had cost him, which, in many instances, was much below their value [i.e. market-price]. Mr Ruskin went through them and made a very choice selection; taking, as the gentleman afterwards good-humouredly remarked, the coins upon the possession of which he had prided himself the most. On them are portraits of Cromwell, of Henry VIII., and other historic personages; some of them being very fine, and of peculiar value. Mr Ruskin has asked Mr Swan, the curator, to have these coins mounted in the best possible way for exhibition without being touched. The collection will include coins of great rarity, and every one of them beautiful, and from which something can be learned. They have been selected for educational purposes, and the student will be further assisted by a catalogue of them, which Mr Ruskin has already commenced.“

It is a pity that Ruskin’s collections of coins have not received more attention from museum visitors and scholars over the years, though Robin J. Eaglen deserves to be mentioned as one of the few experts to have taken an interest (see below). Another, perhaps, is William Rusher Davies (1827-1892), who visited St George’s Museum in Sheffield in August 1884. Born in Reading, my own home-town, Davies followed his father as a grocer and tea dealer, and by the time he visited the museum he had set up business in Wallingford.  In the course of his life he amassed a large and significant collection of Roman, Saxon, and English coins, and a large numismatic library. He became a member of the Numismatic Society in November 1869. He was a serious collector of other antiquities, too, and donated to Reading Museum local examples of Neolithic arrow-heads and implements, Stone and Bronze Age weapons and instruments, as well as Roman fibula!

Let’s hope that a full study of Ruskin’s coin collections appears in the not-too-distant future.

Sources not given in the text

[For the published letter about Ruskin’s magnifying glass] “Ruskin: The Magnifying Glass he Gave as Souvenir” in Yorkshire Post and Leeds Intelligencer (6 January 1937).