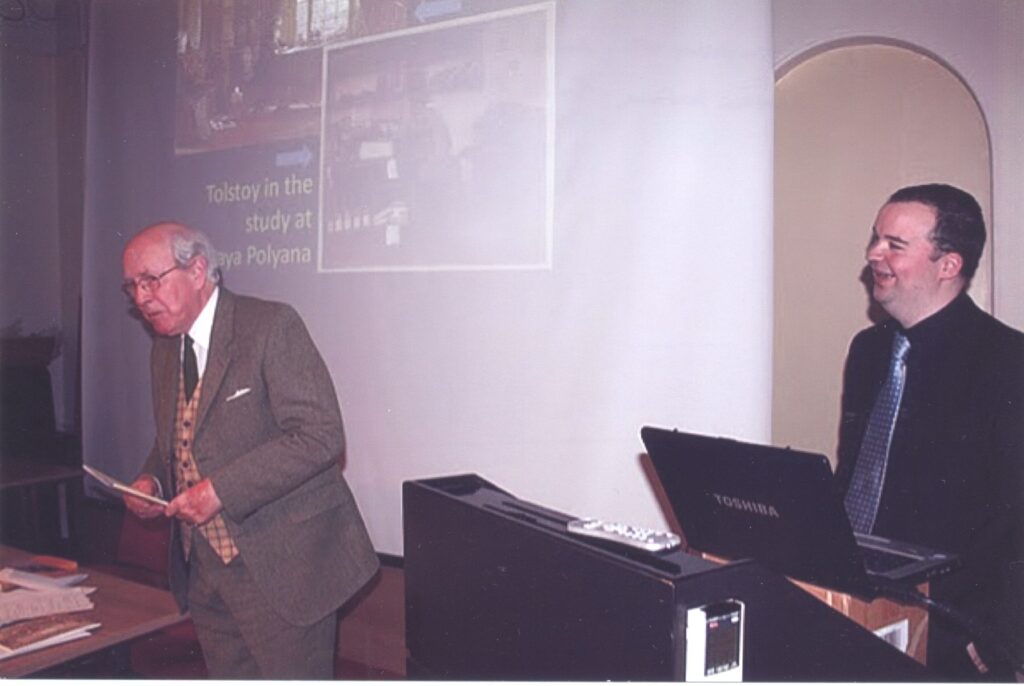 Jim Dearden giving the vote of thanks to Stuart Eagles at the Ruskin Lecture, at York, 2010.

I have lost a friend, and the world has lost the grandpa of modern Ruskin Studies.

Shortly before Jim’s death, on the occasion of his 90th birthday, several of us were fortunate to be given the chance to voice our sense of indebtedness to a man remarkable for his kindness, and a scholar renowned for his deep knowledge and unbounded intellectual generosity.

The opportunity came when Jim—who had been awarded an honorary doctorate by Lancaster University, a Whitelands Anniversary Fellowship, and an MBE—was given the first Lifetime Achievement Award by the Ruskin Society of North America.

Jim’s truly was a lifetime’s achievement. He was educated at Bembridge School, on the Isle of Wight, founded by Ruskin disciple, collector, and keeper of the flame, John Howard Whitehouse (1873-1955).

The child was father to the man. As a schoolboy Jim developed some of the interests and skills that would come to define his career. He spent half an hour every evening copying out portions of Ruskin’s diaries; he was curator of the school’s Natural History Museum, and secretary of its Natural History Club. Whitehouse met Ruskin at Brantwood in the 1890s, so that to shake Jim’s hand was to be just one remove from Ruskin himself.

Jim was at the centre of Ruskin Studies from the late 1950s. It was then that he returned to Bembridge as the school’s printing master and Keeper of the Ruskin Galleries. As such, he was the archivist and curator of the most important collection of Ruskiniana in the world. And he was the public face of Ruskin scholarship.

For nearly 65 years Jim would contribute to every facet of Ruskin Studies. He wrote numerous articles, pamphlets, bibliographies, and book-length studies. He curated exhibitions, organised conferences, and both founded and ran the Ruskin Association to disseminate Ruskin news worldwide. He was a Companion, Director and eventually Master of Ruskin’s Guild of St George.

As a correspondent of nearly every Ruskin student and scholar from the 1950s onwards, he contributed to the work of hundreds if not thousands of others. The joy of receiving a letter from Jim—even one in his indecipherable handwriting—may not have been a rare treat, but it was a precious gift.

He was the ultimate Ruskin sleuth. Never jealous of his vast stores of knowledge, he furnished vital information to everyone who approached him. Even more importantly, perhaps, he constantly encouraged others by kind words, generous deeds, and endlessly keen interest.

Jim was also infectiously cheerful. A gentle man, his spoken voice was almost musical, a honeyed tone that reminded my ear of John Betjeman. Impeccably well dressed, he always wore a smile. His anecdotes, often self-deprecating, were invariably humorous, entertaining, and instructive.

He was limitlessly curious and always determined to plug gaps in our knowledge and understanding. He was precise, accurate, and dependable

He managed to balance old-fashioned charm and enduring relevance.

He was my friend.

He was Jim Dearden. 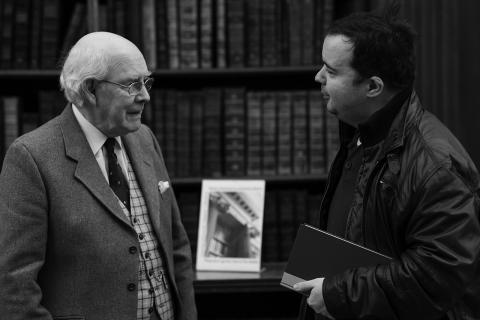 Stuart Eagles with Jim Dearden at the launch of Jim’s magnum opus, “The Library of John Ruskin”. Christ Church, Oxford, 2013.